LED’s vs CFL’s is the title to this post because I have found a lot of people don’t have a full understanding of what each one is and what the pro’s and con’s are for the bulbs.

LED is an acronym that stands for Light Emitting Diode. A diode is basically a 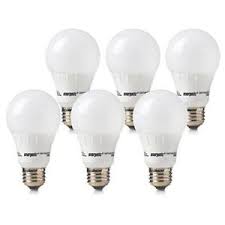 semiconductor that only allows electricity to flow one way, sort of like a one way valve. LED’s do not run on 120 volts like other lights and appliances in the home. They have a small incorporated transformer that steps the voltage down to 24 volts before getting to the diode. LED’s use very little energy and have a very long service life. A 60 watt equivalent bulb may use as little as 9.5 watts and last for 50,000 hours or more. Multiply that times the amount of bulbs in your home and you have some significant savings. In order to get the right LED for the job you’ll need to learn some new terms. Below are some things to consider when shopping for LED’s.

When buying LED’s there are things to consider that you normally would not when buying other bulbs.

As you can see, when it comes to LED’s there is a little bit of a learning curve. The benefits are that you get great light, they use less energy and have a very long life expectancy.

CFL stands for Compact Fluorescent Light which is exactly what it is, a fluorescent light in a compact size to fit in regular bulb sockets. A CFL runs on full 120 volts and uses less electricity than a standard incandescent bulb. A 60 watt equivalent CFL bulb may use around 14 watts depending on the manufacturer. Although the lifespan has been improved over time, a CFL cannot compete with an LED when it comes to service life. Many complain that CFL’s do not last as long as they are purported to and have gone back to incandescent bulbs as a result. This is usually do to the ballast wearing out or being faulty. A fluorescent light will wear out much more quickly in a residential application than a commercial application because of the ballast. They are meant to be turned on and left on. The initial start up is what stresses them the most.

If you are considering purchasing CFL’s for your home there are some things to consider that unfortunately, many people are unaware of.

As you can see, CFL’s don’t have much good to offer other than their reduced electrical consumption. If you currently have them in your home, I recommend that you properly dispose of them and replace them with another type of bulb for the reasons above.

This is not intended to be a hit piece on CFL’s. However, in my business I meet many people weekly that are completely unaware of the negative aspects of CFL’s and the different characteristics of LED’s. I hope you will share this far and wide so that people can gain a better understanding of  LED’s VS CFL’s.