Cleaning Up the Mess – A Home Inspector Speaks

Cleaning up the mess

Let’s face it, no home inspector is perfect. I have been in the construction business for over 20 years now and had a home inspection company for over four. To be honest, I didn’t even know what a home inspector was before my mother in law mentioned it to me. 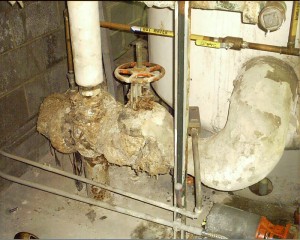 Back to the subject. One of the services I offer is a home seller’s consultation where I will informally evaluate a prospective home for sale at a reduced price and the seller will take notes which empowers them to either take action on the items I point out or not. Either way they won’t be surprised when the buyers inspector comes through. Out of the last five of these I have performed, two of them have had major existing items that were not brought to the home owners attention. Namely Asbestos. I service a large area that encompasses Cedar Rapids, IA, Cedar Falls, IA, Waverly IA, Iowa City, IA and everywhere in between. Many of the homes were built-in the 1940’s, 1950’s and 1960’s. The use of asbestos was fairly common in this area during that era.

When I tell the home owner that they have suspected asbestos around the remnants of their gravity feed furnace ducts or vermiculite insulation in their attic which, if it came from the mine near Libby Montana, could contain a percentage of asbestos, they are speechless. They will say, “we had this place inspected when we moved in and nobody told us that”.

On the last home inspection that I performed, the owner reported to me that he had been in the attic working without a respirator for several weeks before he called me. I only hope the vermiculite insulation that was installed in his attic did not contain asbestos. I feel really bad for these folks because the person who did their inspection missed something as common as cardboard in this area of the country.

The moral of the story is that if you are going to have a home inspection, you need to ask your inspector about their construction background. If there isn’t any, you might ask some additional questions or move on and find one that has experience in construction. I’ll say it again. How can you pick it apart if you’ve never put it together?